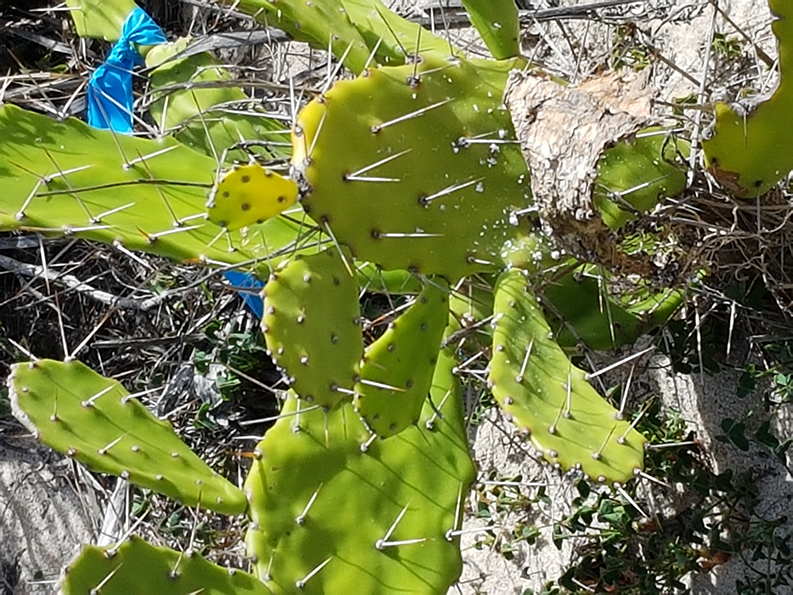 Funding through Department of Primary Industries and Regional Development (DPIRD), Agriculture and Food in 2017 provided the opportunity for the group to deliver the Coordinated Cactus Campaign project, ‘Building capacity to eradicate Opuntia monacantha on the Oldfield River.

Being a registered Aboriginal Mythological Site, with significant cultural and heritage value to the Nyungar people we corresponded with the Esperance Tjaltjraak Native Title Aboriginal Corporation inviting them to look at the project prior to commencement and to work with us during the project.

As part of the project, trials have been established in the river system, using herbicide applications through stem injection, soaking of dowel prior to placement into the base of the cacti, basal barking and foliar spray. A pad segment has been wrapped in black plastic to understand if it would be an option for control. In July 2017, the biological control cochineal (Dactylopius ceylonicus) was granted permitted organism status in Western Australia. Release of the organism following a successful breeding program allowed placement onto live cacti plants in March 2018.

Currently, stem injecting appears to the most effective method, although some weeds will need to be treated a second time. With pads and plants spread by the February 2017 flood event we place importance on removing or controlling these prior to any future flood event. Manual collection of broken off segments has resulted in 450 kg being removed from the river and correctly disposed of.

Although not being able to utilise the biological control until the second half of the project, spread of the insect by placing of infected pads onto live cacti plants resulted in the cochineal spread onto previously uninfected pads. The optimal rearing temperature for the cochineal is 26-30C.  Below 16C they are dormant, above 30C will see increasing mortality. With the cacti plants not in close proximity to one another cochineal infected cacti pads may be required to be spread manually. Cochineal establishment has been successful, with last monitoring survey (November 2018) indicating that around half the mature plants present in the area are completely covered in cochineal.

The group have also been successful with other funding applications and been partnered by Ravensthorpe Agricultural Initiative Network (RAIN) which has allowed a continuation of control work.  Further control measures will be dependent on additional grant funding being available.

Previous promotion of this project has resulted in reporting of cacti plants outside of the river system.  Both the Ravensthorpe Shire and Department of Biodiversity, Conservation and Attractions (DBCA) have partnered with the group to undertake control work to remove the reported plants.  We encourage all residents of the shire to continue to report to the Southern Biosecurity Group any cacti located. This will allow for removal of the weed to be coordinated.

In the Oldfield River, ongoing control work and rechecking of sites already cleared will be required for several years to ensure that the plant is eradicated.  This will not only protect the status of the river system but will also prevent spread of the weed onto agricultural land.