Your environment ∙ Your responsibility ∙ Your legacy

Southern Biosecurity Group - What are your priorities?

What are your priority declared species for control?

If you have concerns or ideas for what declared species the Southern Biosecurity Group needs to focus on, then please click on the link in the headline above to go to MailChimp and take a few minutes of your time to complete the short 7 question survey.  Your information is vital in assisting us with formulating the Operational Plan for 2022/2023.

If you would prefer to email your suggestions, then please contact our Executive Officer via email at sbg.execofficer@gmail.com

Information received from the Survey is used to inform the Operational Plan and guides implementation of the Declared Pest Rate.

We thank you for your participation.

Bridal Creeper poses one of the biggest threats to our precious local species across most of Southern Western Australia and is recognised as a weed of national significance. A strip of land in the original area along the Hopetoun foreshore still has a large infestation, due to very soft humus soil that is very conducive to Bridal Creeper growth. Our Licensed Pest Management Technician treated the area  in August 2021 and will again be sprayed in early spring just before flowering for maximum effect.

Bridal creeper is a perennial climbing vine, which can sprawl for several metres, smothering the plants around it.  It’s a “Declared Pest” in WA and is nationally recognised as a ‘Weed of National Significance’.  This highly invasive weed causes serious problems outcompeting native plants and crops by smothering or preventing germination.

To begin addressing this significant issue within the Shire, the Southern Biosecurity Group funded a project that facilitated 4.6 hectares of bridal creeper control along the Hopetoun foreshore. The area treated was identified as a high priority due to its visual exposure, public access, and proximity to the RV camping area as well as other patches of remnant coastal vegetation and mallee communities.

The work was carried out by a team of two Licensed Weed Management Technicians using a light hand spray method over three days in October. Taking environmental considerations into account and to ensure that the surrounding native vegetation was minimally affected, the application was selectively hand sprayed at a very low dosage. A red dye was also incorporated into the solution to make the treated area easily visible.  Signage was also used as a precaution to warn people to stay out of the treated area. The naturally occurring biological control agent known as ‘rust fungus’, or Puccinia myrsiphylli, was also released in the targeted area in an attempt to initiate its spread throughout the district. 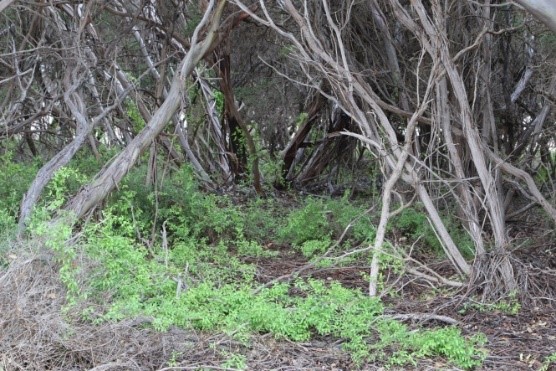